Part I: Are you still running around the pitch?

Football as a worldwide sport has been suffering evolutions in the way the game has been played over the years, with increasing intensity, speed and power actions. This evolution, apart from bringing more enthusiasm around the game, also increases the demand around training methodologies that can habilitate players with the right fitness level to match such physical requirements of this sport.

This fact made training methods suffer variations with time, and if nowadays one seems to be heading the right direction, several exercise selections remain questionable in terms of utility, specificity and potential to maximize performance whilst working as an injury prevention factor in football players.

The aim of this article is to discuss some of the current methods adopted in football conditioning, whilst reflecting of what could be the best choice for a fitness adaptation to the demands of this game. In a future part II, of this article we will discuss the impact that training methods may have on the different types of injuries observed in football, reinforcing our judgement of the training methodologies that should be adopted for what we at Football Medicine believe would be the best association between Performance Enhancement-Injury Prevention. 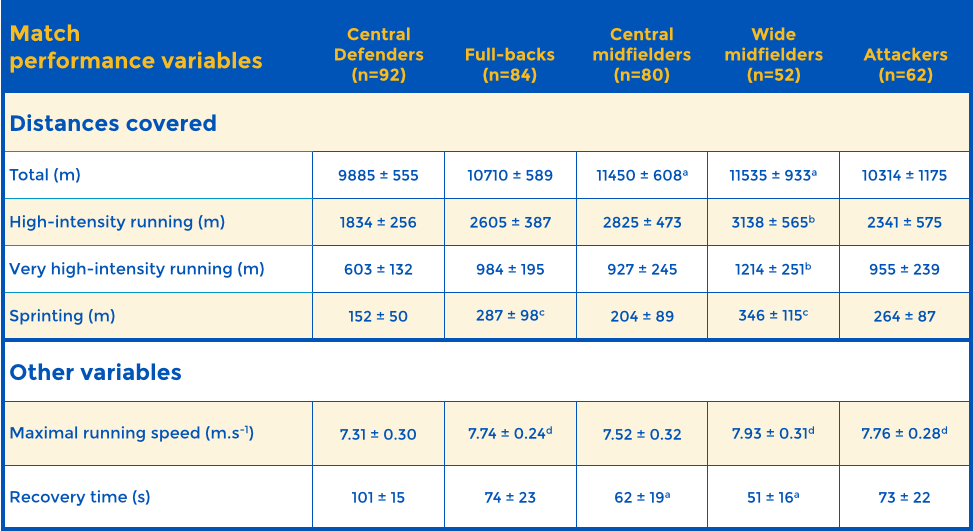 As shown in in the study of Bradley et al. (2009), positional differences play a significant role in the physical demands the player has to face during the game. For example, wide midfielders cover the most high intensity and very high intensity distances (3138 m and 1214 respectively) than other positions. This positional variation in running intensities is supported by other studies such as the one by Carling et al. (2012), in which, 20 professional players over 80 French League One matches were analysed considering high-intensity actions (speeds above 19.8 km.h-1 with a minimum of 1 second direction). Their findings revealed a field positional influence for high intensity actions, and also an influence by the way the game is played on different recovering times between efforts. As an example, although the average time of recovery between high intensity actions was 61 seconds, central midfielders presented the lowest time of recovery between these actions, with less than 20 seconds. 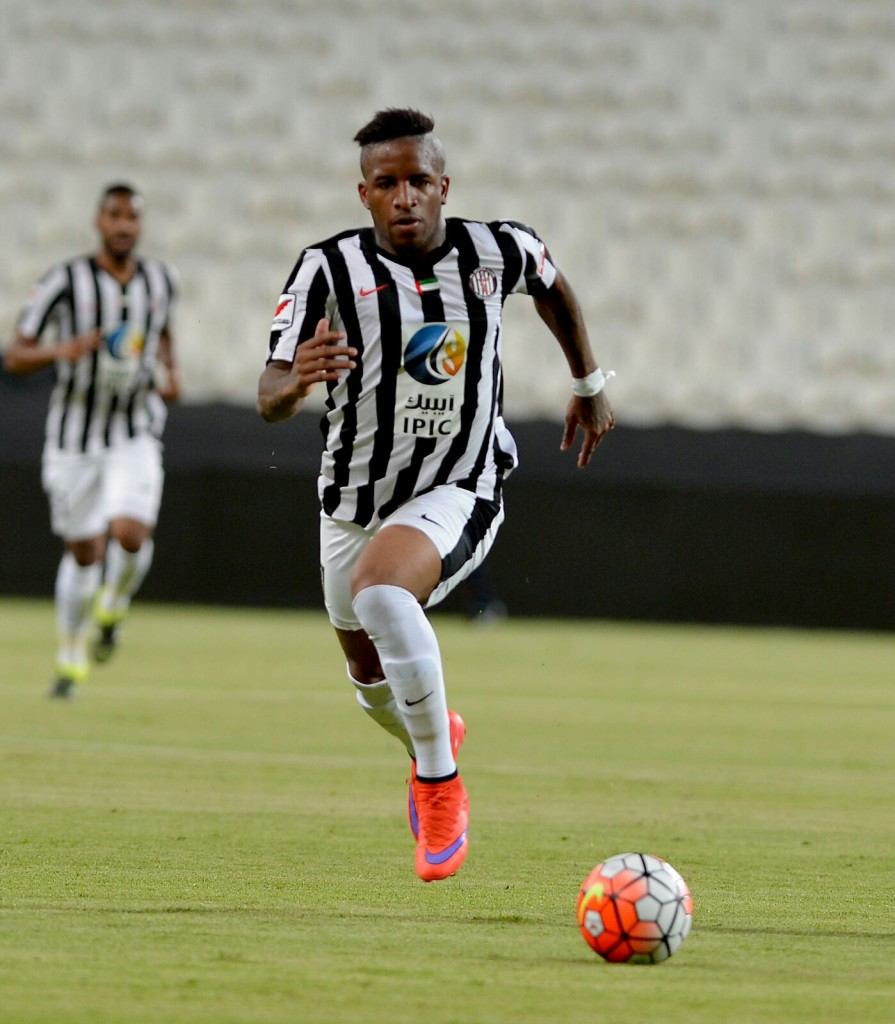 Considering all this information about the game demands, it would be reasonable to think that training methods should result in a balanced combination of high intensity actions involving running for short periods of time, and strength exercises in which acceleration and deceleration are stimulated through direction changes, as well as combining different resting times between efforts, according with the true nature of this sport, in order to recreate the metabolic and the mechanic demands of it. The expected final product of this will potentially be athletes better adapted to the efforts they will develop in the football field, with the advantage of a decreased overload risk resultant from additional non-football specific training methods with repetitive actions such as continuous running around the pitch. A second and main advantage will be a better fitness conditioning of the athletes for competition, which in its turn will also work as preventive factor for potential injuries.

To go into the type of efforts referred above there are several strategies that can improve conditioning in a football player. Exercises adopted in football will vary in the type of effort being developed (running, sprinting, changing directions) with or without ball involvement, performed in a wider or narrow space, with variable number of athletes in the drill or simply delivered as a single individual exercise. As already mentioned, we can basically divide the exercises in those implicating a strength development, such as the ones performed in relative short spaces involving direction changes (acceleration and decelerations); and resistance type efforts which imply high (≥ 18km.h-1) and very high speed (≥25,2 km.h-1) actions using larger areas for running or sprint efforts.

An argument quite often used by fitness coaches to include continuous intermittent running around the pitch is the aerobic conditioning. VO2Max improvements from high intensity intermittent continuous running (e.g. 4 x 4 minutes) will serve as fitness basis and improve tolerance and performance in the remaining football exercises, including the ones involving short intermittent maximal efforts, direction changes or high speed running. However, by running in continuous bouts (e.g. 4 x 4 minutes) around the pitch one cannot recreate the metabolic and musculoskeletal demands typical from this sport. Due to this fact there is a growing interest in the effects that other exercises such as Small Sided Games (SSG) may have on the cardiovascular conditioning through changes in VO2Max and heart rate response on the players (Sassi R, Reilly T, Impellizzeri FM 2004, Dellal A, Chamari K, Pintus A, Girard O, Cotte T, Keller D 2008, Impellizzeri FM, Marcora SM, Castagna C, Reilly T, Sassi A, Iaia FM, Rampinini E 2006, Reilly T, White C 2004, Faude O, Steffen A, MKellmann M, Meyer T 2014).

All the findings from these studies show no differences in the heart rate response from SSG and high intensity continuous training. Smaller format SSGs using relative large area elicit similar intensities to both long duration interval running and short-duration high-intensity interval protocols. However, it appears that the variability in exercise stimulus is greater in SSGs, allowing a simultaneous incorporation of tactical and technical training which won´t happen with a continuous running method (Faude O, Steffen A, MKellmann M, Meyer T 2014).

Another argument advocating a high intensity continuous run in the format of high intensity intermittent training (e.g. again the 4 x 4 minute blocks) is the fact that only selecting SSGs as a model of training may fail as muscle stimulus in what concerns to running in higher distances, because in fact some football players may often have to repeatedly perform a 70-80 meter high intensity run, and this will create a significant demand on muscles such has the hamstrings (Schache AG, Blanch PD, Dorn TW, Brown NA, Rosemond D, Pandy MG 2011), which will probably contribute for them to be the most common muscle injury in this sport, and also the one that normally causes more absence from training and competition (Ekstrand J, Hagglund Mand, Waldén M 2011). However, being football mainly constituted by repeated high-intensity sprints or high intensity actions, with low- to moderate-intensity activities such as walking and jogging in between, this activity is defined as repeated sprint ability more than an intermittent continuous run (Bishop D, Girard O, Mendez-Villanueva A 2011, Spencer M, Bishop D, Dawson B, Goodman C 2005). Typically, sprint distance may vary being the mean distance and sprint time of 10 to 20 meters and 2 to 3 seconds duration as described by Carling et al. (2012), with bouts of efforts of three repetition maximum with mean recovery times not exceeding 20 seconds between high intensity sprints.

This way, despite at Football Medicine we share the view that larger distances high intensity running are necessary for a football player´s conditioning, especially to develop negative work in muscles such as the hamstrings and improve their performance and tolerance to those efforts, we also advocate that high intensity runs should be delivered during the training session in the form of 20-80 meters bursts, combined with different resting times and if possible involving some tactical or technical exercise relevant to the coaching staff. Video 2 shows an example of two high intensity running or resistance exercises with several distances combined and football actions included. This is therefore an example of how high speed running in different spaces can be performed more in accordance with football demands. Although the exercises are shown as isolated in the video, several combinations between them can be performed with different stoppage times and different recovery actions between them.

Why continuous run methods are NOT ideal for a football player?

Being football an intermittent sport, the performance of continuous run does not replicate a true sport-specific demand either metabolically or from a muscle skeletal point of view. The absence of maximal eccentric actions, repeated accelerations and decelerations, maximum speed efforts and direction changes that are present in continuous running make it not an ideal choice of exercise for football conditioning, despite the aerobic capacity improvement associated with these exercises. Even if the continuous running is performed as a high intensity intermittent training, with bouts of 4 minutes at maximum effort, it will probably be a better option to distribute the same time in short sprint or high intensity actions between 20-80 meters and combining distances (e.g. 1 sprint of 30 meters, 2 passes or dribbling in 5 seconds followed by a second 50 meters sprint and final passing or reception), varying exercise duration and rest times (e.g. 1:2, 1:1) with several active recovery options (walking, jogging, passing the ball with team mate, dribbling…). This will work more specifically on the repeated sprint ability which we at Football Medicine support being what matters the most in football conditioning. Thus, if the purpose of the high intensity intermittent training is to improve VO2Max and endurance capacity in athletes, it was demonstrated by several studies involving SSGs that this objective can be achieve through the use of this model of training as well, with the advantage of the intermittent nature of this exercises favouring mechanisms such as tendon recoil through acceleration/deceleration actions, and the possibility of integrate technical and tactical actions in this type of exercise.

“If you fail to prepare, you’re prepared to fail.”