The importance of maximum strength on soccer 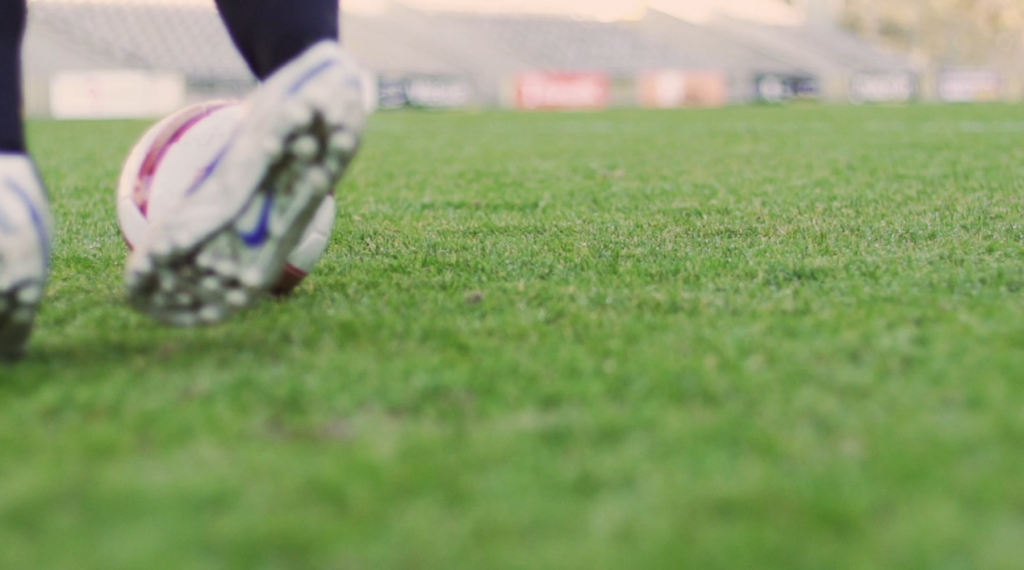 At Football Medicine we welcome external contribution from sports professionals . Our friend Francisco Tavares, from Pure strength training, and Head of Strength and Conditioning from Cascais Rugby wrote this interesting review work entitled “The importance of Maximum Strength training in Football”

Strength and power in soccer

In soccer there are around 1000-1400 strength and power actions per match (Stølen, Chamari, Castagna, & Wisløff, 2005). Actions like sprinting, jumping or kicking are known to be critical on a soccer match, therefore, is not surprising that maximum strength and vertical jumps can distinguish competitive level between soccer athletes (Faina e col., 1988; Wisløff, Helgerud, & Hoff, 1998). In a study two teams from the Norwegian elite soccer league, one elite and other sub-elite, were compared regarding endurance, strength and power (Wisloff et al., 1998). The elite team (Rosenborg) was the most successful team in the elite soccer league, while the sub-elite team (Strindheim) was playing for the first year on the major league at the time of the study. In what respect to lower body strength and power, both teams were tested for one repetition maximum (1-RM) 90º squat and vertical jump. Not surprisingly, the more competitive players (elite team) were significantly stronger compared to their opponents (sub-elite team) with squat values of 164 ± 21,8 kg and 135 ± 16,2 kg respectively. Power was also higher (not significantly) in athletes of the elite team compared to the sub-elite, with jumping heights of respectively 567 ± 66 mm and 531 ± 40 mm. 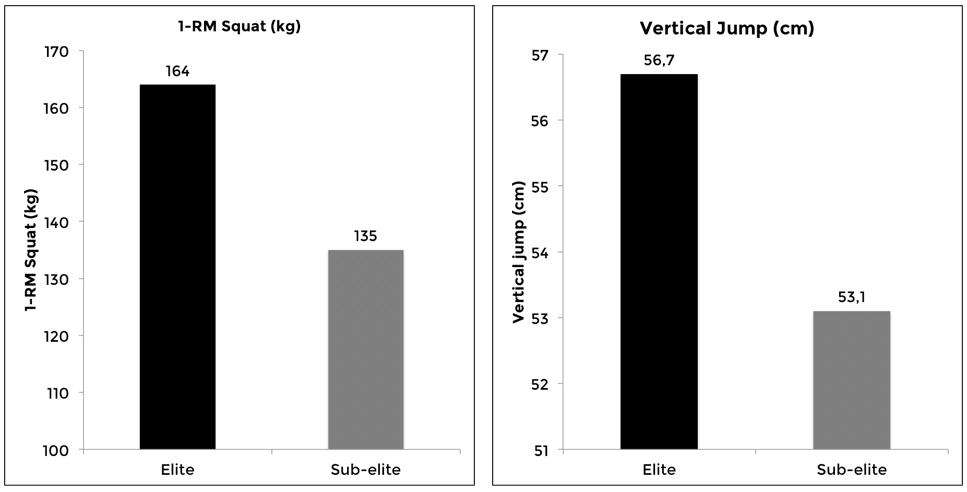 Also in Italian soccer league, Faina et al. (1988) observed that professional athletes were more powerful in lower body in comparison to amateur players as they jump higher in countermovement squat jump (professional 43,5 cm vs amateur 40,4 cm) and squat jump (professional 36,9 cm vs. amateur 34,2 cm). Sprinting is another determinant action in team field sports. Particularly in soccer, players spend an average of 11% of the match sprinting with a short sprint occurring every 90 seconds, so it is not suppressing that differences on sprinting performance exist between different competitive levels (Brewer and Davis, 1992). Brewer and Davis (1992) verified that in England, professional players run faster in comparison to semi-professional players in both 15 m (2.35 vs. 2.70 seconds) and 40m (5.51 vs. 5.80 seconds). Numerous examples can be found in the literature, an extensive review on this topic can be found on the paper of (Stølen et al., 2005).

From a mechanical point of view, power is dependent on force and velocity (Power = Force x Velocity) so one can expect increases on power after an increase in force, velocity or both (Newton & Kraemer, 1994). Nevertheless, maximum strength is often seen as a primary goal as it strong correlates with power, speed and agility. In figure 2A, B and C can be observed some data from rugby athletes demonstrating high correlations between lower body relative do bodyweight maximum repetition (1-RM/BW) and sprint performance (10, 40m) and jumping height. The review paper from Cormie, Mcguigan, & Newton (2011) gives an extensive analysis on this topic. Specifically in soccer, stronger elite athletes are able to perform better on sport specific tasks such as jumps and sprint performance, as strong correlations exists between this actions and lower body maximum strength (Wisloff, Castagna, Helgerud, Jones, & Hoff, 2004). Also in youth, lower-body strength correlates with sprint and jump performance (Comfort, Stewart, Bloom, & Clarkson, 2014; Sander, Keiner, Wirth, & Schmidtbleicher, 2013). So one can answer, how strong is strong enough? Barker (Barker et al., 1993) verified that athletes with a Squat 1-RM superior to 2x their bodyweight can perform better on a vertical jump in comparison to their contra parts with 1-RM/BW ratios of 1.4 and 1.7. Ruben et al. (2010) also observed that subjects with squat 1-RM/BW superior to 2.0 could express higher values of power outputs on a horizontal jump task. Therefore the rule of 1-RM squatting of at least 2.0xBW is commonly referred in the strength and conditioning literature (Haff & Nimphius, 2012; Wisloff et al., 2004). Even in youth and teenagers, age 16 to 19, the maximum repetition value of 2.0xBW seems to be quite easy to achieve (Keiner et al., 2013). 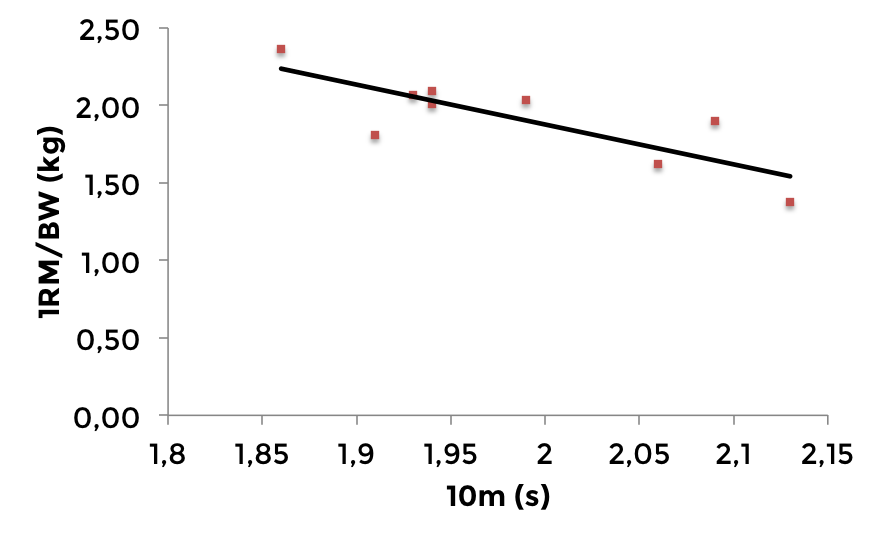 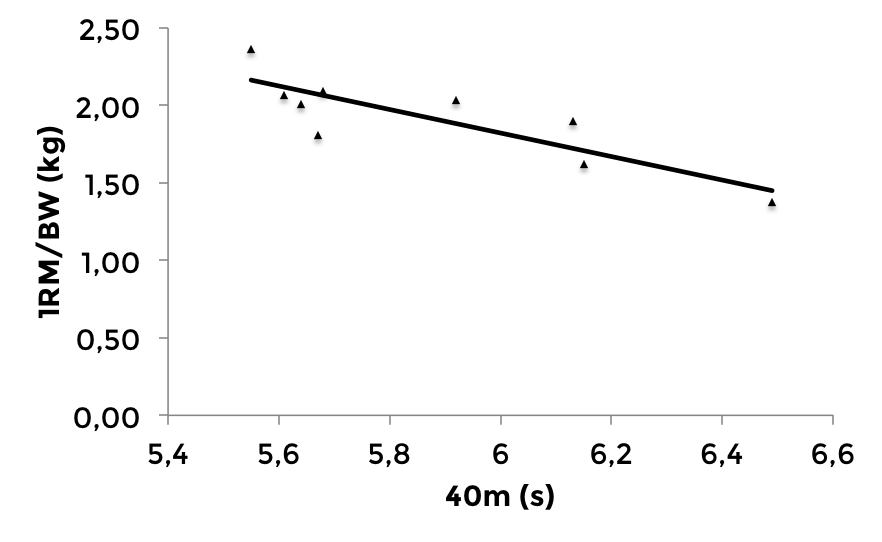 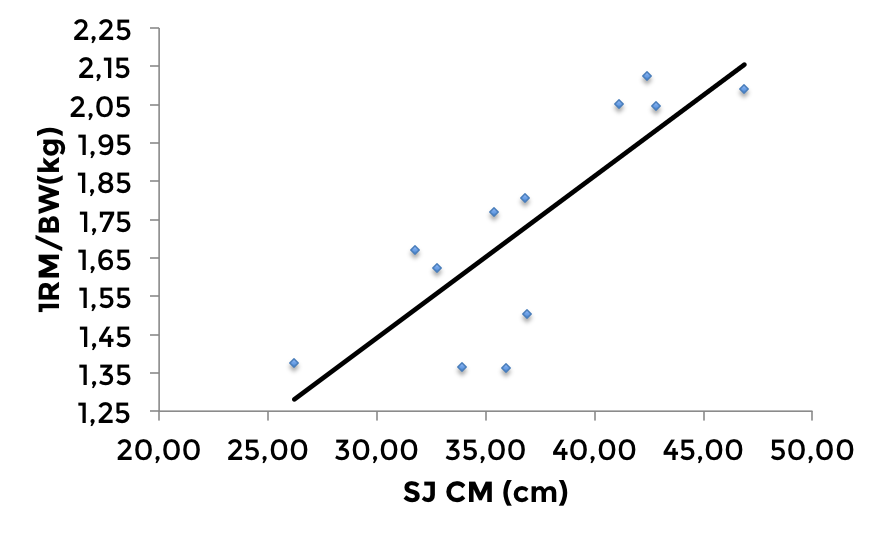 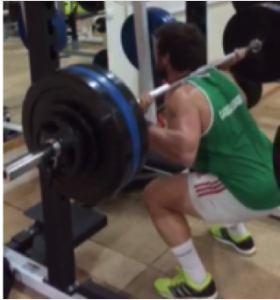 Given the importance of power and sprint performance for soccer and its correlation with maximum strength, it is highly recommended that strength and conditioning coaches implement training programs that emphasize increases on maximum strength (Sander et al., 2013; Wisloff et al., 2004, 1998).

It was previously discussed the importance of maximum strength on soccer, nevertheless there is a paucity of coaches who choose not to include strength and power training on the habitual routines of their athletes. This might happen as the conceptual knowledge on strength training resemble to the training programs designed for bodybuilders or fitness enthusiasts.

Maximum strength can be increased by either morphological or neural mechanisms. Typically long-term training programs for maximum strength target first on muscle hypertrophy followed by muscular activation. From a methodological point of view, and given the continuum of repetitions, hypertrophy can be stimulated with moderate to high intensity of load (i.e. 70-85% 1-RM or 6-12 RM) and neural mechanisms that enhance maximal strength are optimized with maximal or near-maximal loads (i.e. >85% 1-RM or <6 RM). Generally multi-sets and multi-exercises per muscle group are prescribed for both muscle size and maximum strength (Fleck & Kraemer, 2014; Kraemer & Ratamess, 2004). This type of training method is known to elicit hypertrophy of the muscle fiber to a large scale and therefore it’s been used for decades, with bodybuilders or team athletes as rugby or American football players who needs high values of muscle mass, strength and power. Even those types of athletes are normally very meticulous on the period of the season they chose to implement this type of training blocks (normally during off-season), as it is highly demanding and can compromise training adaptations of other components (i.e. concurrent training). Although this high volume training, with lot of exercises targeting the same muscle group optimize muscle hypertrophy and maximum strength, one can easily find the beneficial effects of incorporating a single exercise (i.e. squat training) for improve strength and power (Ronnestad, Kvamme, Sunde, & Raastad, 2008; Sander et al., 2013). Sanders et al. (2013) implement a squat training on 3 different age groups (17, 15, 13 years) for a 2-year period. After an adaptation period, subjects trained for 5 sets of 10, 6 or 4 maximum repetitions, with repetitions held constant for each 4-week block (i.e. 4 weeks 5x10RM; 4 weeks 5x6RM; 4 weeks 5x4RM; repeat the cycle). Players were assessed before and after the strength-training program for 1-RM and sprint performance over 5, 10, 15, 20, 25 and 30m. One repetition maximum improved drastically (from 100 to 300%) in 17, 15 and 13 year-group (Figure 3.). Sprint performance also improved significantly in the majority of measured distances (i.e. 5, 10, 15, 20, 25 and 30m) and age groups. 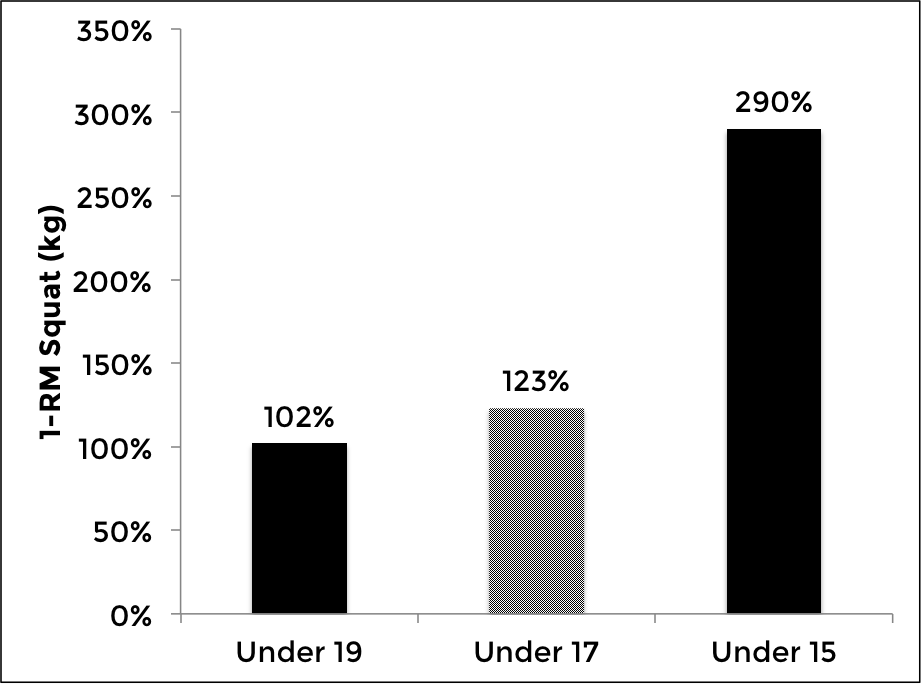 Also in professional soccer players, low volume strength training has revealed to improve maximum strength, jump and sprint performance. Ronnestad et al. (2008) implemented a 7-week strength program with 2 training sessions a week on Norwegian premier league professional soccer players. Players performed 3 to 5 sets of 4 to 6 maximum repetitions for half-squat and hip flexion exercises. After the 7 weeks half squats improved significantly (166 ± 5 to 209 ± 7 kg) together with other power related performance as the 4-bounce test and peak power with external load.

Strength training targeting increases on maximum strength should be incorporated on the training routine of the soccer player as it strongly influence sprint and jumping tasks (Wisloff et al., 2004). Because soccer is highly demanding in what concern to technical and tactical skills, strength programs must be time efficient, seeking essentially for lower body adaptations. A single exercise training session, performed twice a week, might be sufficient to elicit strength and power adaptations in soccer players and can easy be incorporated on a traditional routine. Nevertheless, one should be aware that strength training in combination with plyometric and sprint training results in even greater adaptations in lower body performance (Ronnestad et al., 2008).

An example of a training program can be observed on Table 1:

Moreover, considerations concerning season period, training age, competitive level, concurrent training and others must be taken into account when designing a training program.