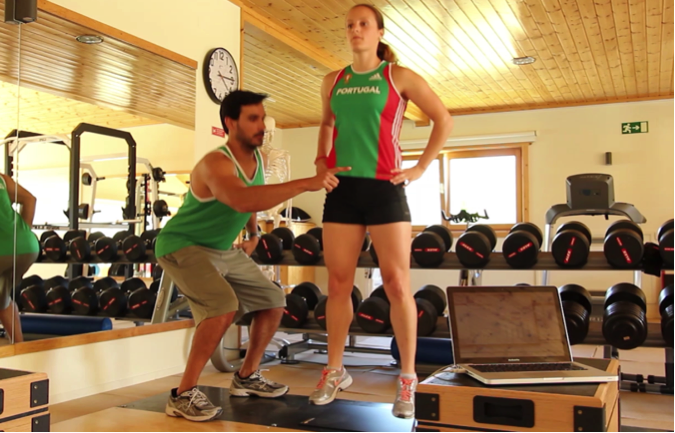 Following his first article The importance of maximum strength on soccer our friend Francisco Tavares from Pure Strength Training, and Head of Strength and Conditioning from Cascais Rugby is back with another important subject about strength assessment on Football. Considering strength methods in Football are extensively used by different professionals, understanding strength´s different manifestations and the importance of assessing them is crucial for baseline assessments and monitoring progressions.

The most commonly type of assessment on the field of strength and power are the maximum strength tests. This happens, given the relationship between one’s ability to express high values of strength and his or her level of performance on a variety of sport related tasks and activities (Comfort, Stewart, Bloom, & Clarkson, 2014; Sander, Keiner, Wirth, & Schmidtbleicher, 2013; Wisloff, Castagna, Helgerud, Jones, & Hoff, 2004). Therefore, assessing maximum strength is determinant when designing training programs for soccer (Sander et al., 2013; Wisloff et al., 2004; Wisloff, Helgerud, & Hoff, 1998). This topic was previously covered on Football Medicine website and you can find it here: The importance of maximum strength on soccer

While a simple 1-RM assessment informs the S&C coach about the level of maximum strength one can exert, it can be too simplistic when profiling an athlete. This happens because strength can be divided on different qualities, wherein the athlete should be diagnosed according to the sport specificity (Mcguigan et al., 2013; Newton et al., 2002). In table 1 it can be observed the different strength qualities that can be incorporated on strength diagnosis. 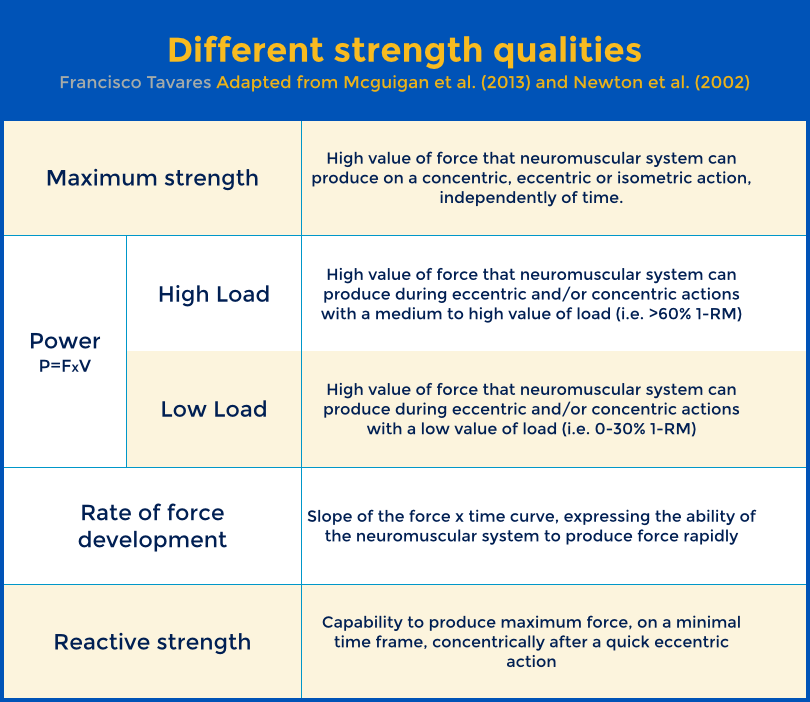 Note: Besides choosing valid (the degree to which a test measures what it is supposed to measure) and reliable (the degree of consistency and repeatability of a test) tests, other important topic on assessing athletes is that single assessing will not bring much information to the S&C coach. Normally testing process is repeated overtime and results are usually used to:

As mentioned previously, because maximum strength is the foundation for further improvements on other strength qualities (e.g. power), every athlete must be assessed for his or her maximum strength. As most of the soccer actions occur on a concentric fashion, a dynamic concentric or isometric action is generally chosen. Because isometric contractions allow for the assessment of muscle within specific angle without movement, this type of testing does not account with the variation on the force-length and force-velocity curve and therefore are commonly used in the field of S&C (Young, Haff, Newton, Gabbett, & Sheppard, 2015; Young, Haff, Newton, & Sheppard, 2014). Nevertheless, isometric strength assessments require some equipments that sometimes are not available in S&C facilities (Figure 1) 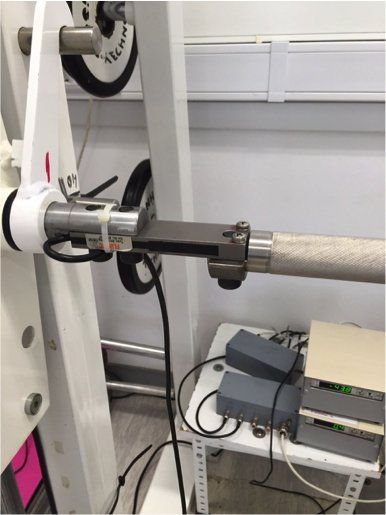 Because most of the soccer tasks can be classified as a low load/high velocity (i.e. 0-30%), this quality of strength must also be incorporated when diagnosing the soccer athlete. Although measuring the exact force being produced requires expensive equipment (i.e. force platform), one can easily estimate the force (or power) by assessing ballistic type of exercises and simply measuring the distance travelled by the resistance (i.e. jump height, medicine ball, etc.). In Figure 2, we were testing an athlete for the vertical jump height. Although we were using a contact mat (do not confuse with force platform that measures ground reaction forces), which works as a timer with an inbuilt formula to calculate the height, one can easily assess lower body (e.g. horizontal jump) and upper body (e.g. medicine ball throws) power by simply measuring the distance. If the resistance mass remains the same and the athlete can increase the distance (e.g. jump height, ball distance, etc.), he or she likely increases the force applied which resulted in an increase of power output (Newton & Kraemer, 1994). 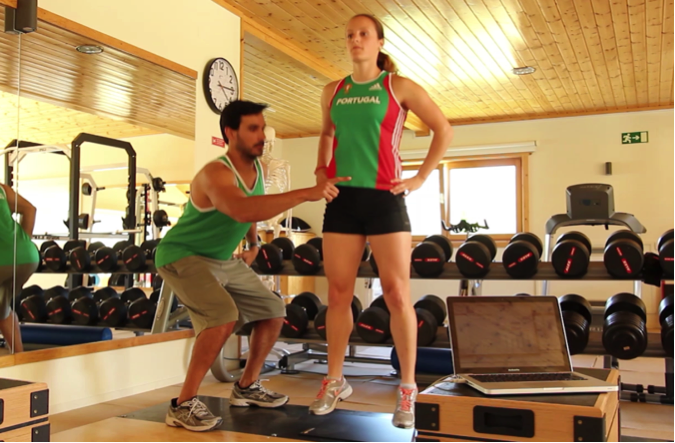 Figure 2 – Athlete performing a squat jump on a contact mat

Although most of soccer actions occur with bodyweight only, sometimes athletes need to perform against greater resistances (e.g. charging against an opponent) (Stølen, Chamari, Castagna, & Wisløff, 2005). Therefore, it can be beneficial to understand how the athlete can generate power under loaded conditions. A simple way to understand this is to perform a SJCM (or SJ) with a load relative to bodyweight (Bosco, 1999). In the figure below (with some data from internal non published research on students) it can be observed the SJCM jump height under different load conditions (i.e. no extra load; extra load equivalent to 50% bodyweight; extra load equivalent to 100%). Because not always an athlete can perform successfully or unsuccessfully on both high and low loads, the understanding of how the athlete performs under different loads can be beneficial when designing the training program (Figure 3: Right).

A very common way that S&C coaches use to better understand how the athlete performs on a high velocity movement (SJCM; speed) and a high force movement (SJCM 100%BW; force) is to compare the result of a SJCM without any extra load (i.e. total= bodyweight) and with a load equivalent to bodyweight (i.e. total= 2x bodyweight). This difference is termed Bosco index, and values near 33% indicating that there is equilibrium between velocity and force. Values under or above ~33% are indications that the athlete need to improve the force or speed, respectively. On Figure 3: Left, one can observe that three athletes have very low values (~17-23%), indicating that these athletes need to improve their force or in other words they would benefit from a program that would improve their maximum strength (i.e. hypertrophy and neural activation).

Figure 3 – Left: Squat jump with countermovement height under different conditions of load: 1) without any extra load and 2) with a load equivalent to 100% of the bodyweight. The red squares represent the Bosco index, which is the different between a SJCM with 100% of bodyweight and a SJCM without any extra load. SJCM = squat jump with countermovement; bw = bodyweight. Right: Example of one subject jump performance under different load conditions (i.e. 0%BW; 30%BW; 50%BW; 100%BW).

Actions like running, jumping or kicking are highly dependent on reactive strength, or the force produced on a concentric movement following a quick eccentric movement of the same muscle or group of muscles. Therefore, commonly, S&C coaches assess tasks with and without countermovement to understand what is the capability of the stretch-shortening cycle. Although there are different mechanisms underlying this specific type of moment, a general picture on the difference between a movement with and without countermovement will expose the potential for training reactive strength on that particular athlete. The most commonly used must be the squat jump with (SJCM) and without countermovement (SJ). In the figure bellow (with some data from internal non published research on students) one can easily observe that the subjects perform better on a countermovement conditioning in comparison to a static condition. The difference between SJCM and SJ is usually termed elastic index and provides valid information for the S&C coach (Bosco, Luhtanen, & Komi, 1983). Elastic indexes (represented on the figure by the blue triangles) greater than 10-15% indicate that the athlete can take advantage of the elastic force and all the mechanisms of stretch-shortening cycle. Other indexes (e.g. reactive strength index, etc.) are commonly used by many S&C coaches and sport scientists (Flanagan & Comyns, 2008).

Figure 4 – Squat jump (SJ) and squat jump with countermovement (SJCM) height. The blue triangles represent the elastic index, which represents the difference between each individual SJCM and SJ.

Rate of force development refers to the slope of a force-time curve and it is typically measured under isometric conditions (G. G. Haff et al., 1997). In Figure 5, one can observe an athlete exerting force isometrically on a force platform built in a leg press. Because it takes a long period of time (500-800ms) for one to achieve maximum force, and given that the majority of sport actions occur on a limited time period (e.g. ~80-100ms of ground contact of the foot with the floor in a experienced sprinter), the RFD assumes a particular importance when assessing the neuromuscular capability of an athlete (Zatsiorksy & Kraemer, 2006). Not surprisingly, this ability of the athlete to produce high amount of force during short periods of time is related to maximum strength and peak power output (Haff et al., 1997; Haff et al., 2005; Stone et al., 2003).

Figure 5 – Rate of force development data (on the left) of a subject’s isometric leg press (on the right). On the left side of the picture, time (seconds) is presented on the horizontal axis and force (N) on the vertical axis.

Because everyone with access to more expensive equipment such as force platforms is probably familiar with strength diagnosis, the following part of this article will be targeted to those who don’t have such type of equipment.

As previously discussed, power can be easily estimated, and because it is determinant for soccer (Stølen et al., 2005), the S&C coach should test athletes for power, specially on the lower body in both loaded and unloaded conditions. Commonly, coaches use a barbell loaded with the bodyweight of the athlete and compare the jump height with a non-loaded situation. As previously mentioned, this differential is termed Bosco index and it gives information on the ability of an athlete to express power when extra load is added. Elastic index should also be incorporated when assessing dynamic strength (mentioned previously). Power output and different indexes can be easily estimated by measuring distance or using a contact mat, a linear encoder or a force platform. Nowadays a contact mat costs around 150€ and the setup is usually friendly user.

Diagnostic allows for more accurate soccer strength program designing, distinguishing weaknesses of a single athlete or a group of athletes. A logical procedure according to different testing is presented below: 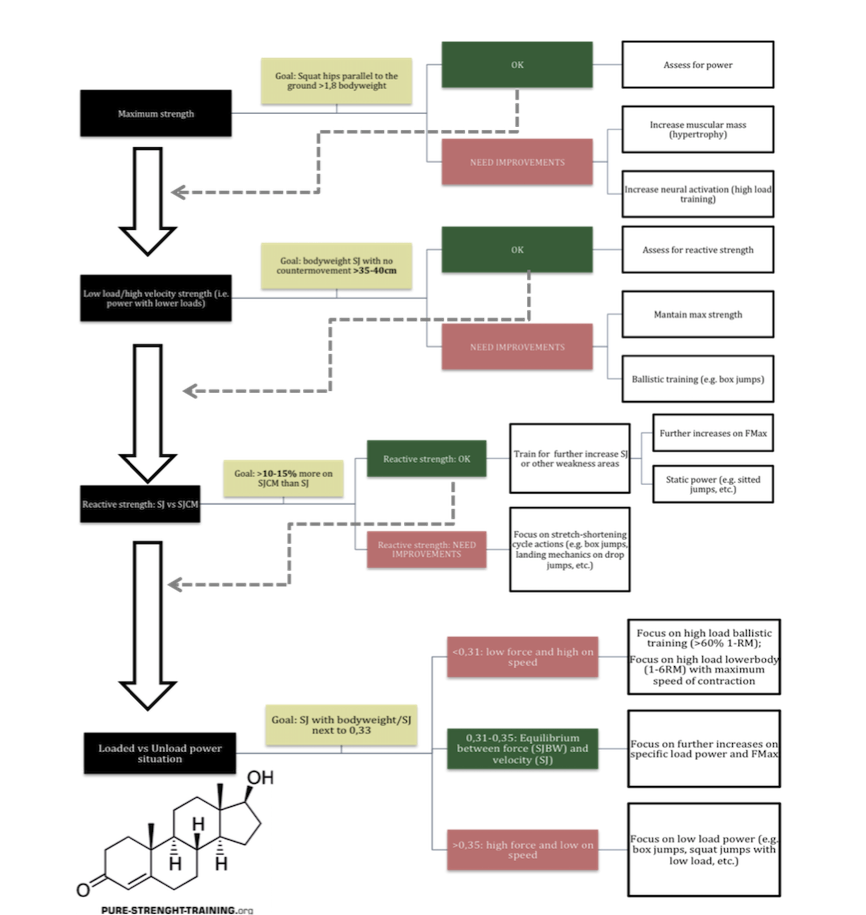 Figure 7 – A logical proposal of a scheme for strength diagnosis

With all data, S&C coaches can determine what can be more beneficial for that athlete or group of ahtletes. As an example, on the figure below one can observe a typical diagnostic of an athlete who is experienced on strength training but who has not been exposed to a lot of ballistic training and therefore performs poorly in ballistic type of movements with low loads (i.e. SJ, SJCM, SJCM 50%BW). 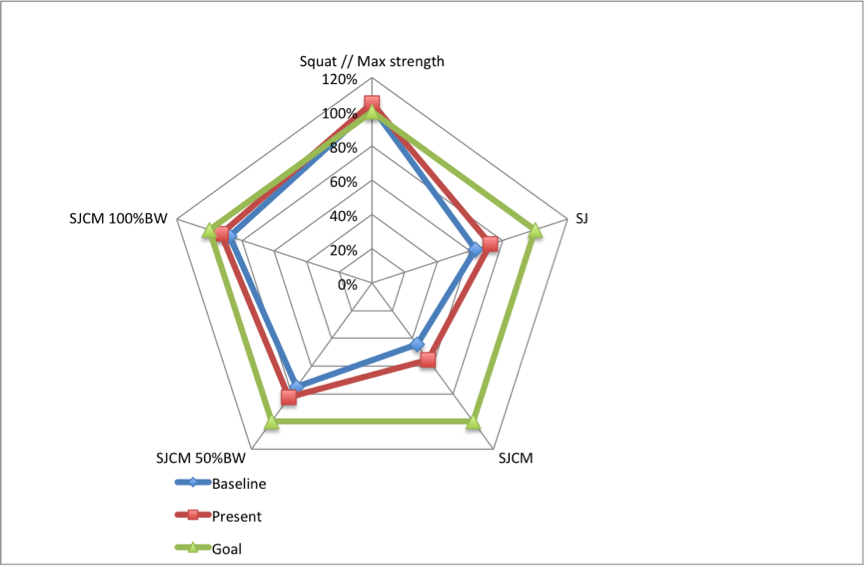 Because this athlete already has acceptable values of maximum strength he should move into a low to moderate ballistic type of training. Caution should be taken as abandoning completely high load stimulus (i.e. 1-6RM) may lead to quick deacreses on maximum strength (Cormie, McGuigan, & Newton, 2010). Testing regularly will give the S&C coach important information regarding the adaptation of the athlete to the training program, therefore assessments should be performed on a 5 to 10 days cycle. Also, monitoring neuromuscular performance can give extra information for the fatigue control.

This article provides an insight into testing and profiling for soccer athletes. Because most of the soccer S&C coaches do not have access to more expensive equipment, he or she must seek out for some alternatives. As mentioned before, contact mats are not expensive and provide valid and important information for the S&C coach. Althought it was presented a logical frame of diagnosis, there are many other alternatives that may suit better for a given athlete or team (Mcguigan et al., 2013; Newton et al., 2002). If you need further help or guidance on your specific scenario, please don’t hesitate on contacting. Although it was not given much emphasis, there are some topics as reliability, validity or data processing, these are all important parts of testing and diagnosing.