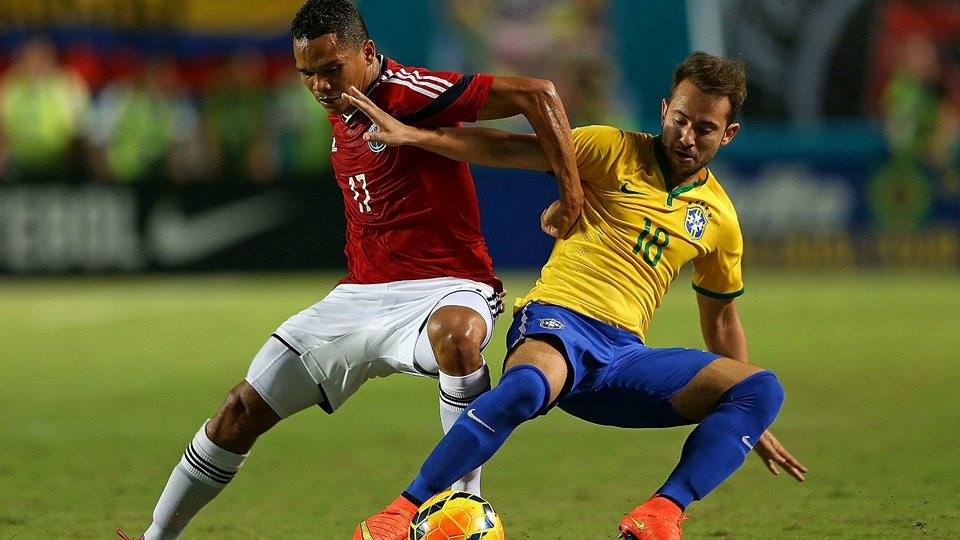 Muscle healing and the role of early eccentric muscle contractions

Muscle injuries are common in football practice. Lower limb muscle injuries represent around 37% of the total injuries in a football team being the hamstrings, adductors, quadriceps and calf muscles the most frequently injured muscles (Ekstrand J., Hagglund M., Walden M., 2011; Hagglund M., Walden M., Ekstrand J., 2005; Hawkins R.D., Hulse M.A., Wilkinson C., Hodson A., Gibson M., 2001; Hagglund M., Walden M., Ekstrand J., 2012). A muscle injury rehabilitation in football or any other sport should be as functional as possible and include early forms of recruitment of the injured muscle. The aim of the present article is to show the benefits of introduction of early isotonic contractions with focus on the eccentric phase instead of isometric muscle actions, and discuss which timings during the rehabilitation are appropriated for different types of stimulus to the injured muscle, after a moderate (grade 2) muscle injury.

How does a muscle heal? 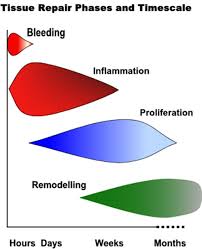 After this period starts simultaneously a reparative process where macrophages remove by phagocytosis the necrotized tissue, and the regenerative process of the myofibers with concomitant production of a connective tissue scar, alongside with capillary ingrowth into the injured area

basal lamina of the myofibres, which will then sequentially form myoblasts, fuse into myotubes and mature into myofibres (Figure 2CDE) (Bisciotti, G.N., Eir

The last stage of a muscle healing is the remodelling phase, which despite overlapping with the reparative and regenerative processes that last up to the third or fourth weeks after injury, remodelling can extend itself up to four or six months (Arrington, E.D., Miller, M.D., 1995; Tidball, J.G., 2005; Kalimo, H., Rantanen, J., Jarvinen, M., 1997). This stage is characterized by the maturation of the fibers recently repaired, and the re-organization of the scar tissue (Figure 2F) (Bisciotti, G.N., Eirale, C., 2013; Jarvinen, T.A.H., Jarvinen, M., Kalimo, H., 2013). Knowledge of this healing sequence and general aspects of each process is fundamental for rehabilitation´s strategies we implement at Football Medicine.

How does the tensile strength of the injured area progresses through the course of healing?

Before answering this question it is relevant to understand when does actually new tissue is being formed, because hypothetically the injured area will be capable of sustaining some level of tension after fulfilled with some scar tissue. As stated in the section above, the first stage after the traumatic event is mainly characterized by a destruction and re-organization of the injured area. New tissue will hardly be formed in the first day after the injury. As it was shown in a study by Best et al. (2001), in which a stretch injury was induced to the tibialis anterior muscle of rabbits, focal fibrotic tissue constituted by deposits of collagen I and III were only noticeable after three days of the initial injury and were significant present after seven days.

The healing progression and its histological changes might be directly related with the capability of the tissue to deform to stimulus in terms of changes in its length but also the amount of load it can be absorbed by the muscle, which ultimately will determine the rehabilitation protocol. Considering this, it is interesting to verify that a study carried out by Corr et al. (2003) using the same laboratorial injury method in rabbits from Best et al. (2001), in which elongation to failure was analysed, concluded that the muscle compliance return to non-injured values after seven days from the injury date.

As shown in previous studies, changes in the healing of the injured muscle are present through radiologic examination, using either ultrasound or Magnetic Resonance Imaging (MRI), with noticeable changes throughout time (Figure 3) (Connel DA, Schneider-Kolsky ME, Hoving JL, Malara F, Buchbinder R, Koulouris G, Burke F, Bass C, 2004 ). However, despite imaging such as MRI and ultrasound have been used to establish return to play prognosis after muscle injuries, (Peterson J, Thorborg K, Nielsen MB, Skjodt T, Bolvig L, Bang N, Holmich P, 2013; Moen MH, Reurink G, Weir A, Tol JL, Maas M, Goudswaard J, 2014; Kassarjan, A., Rodrigo, R.M., Santisteban, J.M., 2012), a recent review from Reurink et al. (2015) suggests no strong evidence for any MRI findings at baseline and return to play time to establish return to play time in hamstring injuries. A correlation between imaging features changes throughout time and the functional performance of the muscle is yet to be determined, as well features on the MRI after return to play and potential re injury risk. As it was observed in a study by Reurink et al. (2014), even when players are clinically recovered and cleared to return to play following hamstring injury, MRI changes are still present, and any risk of recurrence associated with them is still unknown. Therefore imaging should not be the main marker for rehabilitation progression.

Figure 3 – MRI of a moderate-grade strain of biceps femoris in professional football player. Assessment was performed at baseline (A) where fluidlike signal (arrow) tracking into and around muscle fibers can be observed. At 2 weeks follow up features change to an incomplete resolution of fluid signal (arrow) tracking into and around torn central tendon (B), and at 6 week the initial high signal has mostly been replaced by focus of low signal (arrow) corresponding to fibrosis (adapted from Connell et al., 2004).

After the injury episode an immediate protective phase should take place in the first few days (until day 5-6 after injury). Rest is fundamental, especially in the activities where pain is present along with the injured muscle recruitment, and it will contribute to prevent excessive scar formation. There seems to be a positive association between active mobilization immediately after injury and recurrence of the injuries in the original site, reinforcing the need for this protection phase (Jarvinen M., Lehto M.U., 1993). Nevertheless this remark, early pain free active mobilization after a few days, when the proliferative stage of the healing process begins, will induce capillary ingrowth into the injured area, better regeneration of the muscle fibers and more parallel orientation of the regenerating myofibers, improving the rehabilitation outcomes (Jarvinen,T.A.H., Jarvinen, T.L.N., Kaariainen, M., Kalimo, H., Jarvinen, M., 2005).

Rehabilitation and eccentric muscle contractions – When to start

Eccentric contractions develop three times more strength than concentric ones when carried out at the same speed, fact attributed to the elastic resistance capacity of the myosin head during detachment the actine, and the role of the passive elements of connective tissue when the muscle goes to outer ranges whilst still in tension (Bisciotti, G.N., Eirale, C., 2013). Therefore, when a muscle injury happens during an eccentric contraction, its most common mechanism (Garret W.E., 1990; LaStayo, P.C., Woolf, J.M., Lewek, M.D., Snyder-Mackler, L., Trude-Reich, Lindstedt, S.L., 2003), after the injury there will exist fatigue and absence of structural support to resist to eccentric efforts and, when recurrences do occur, these type of contractions tend to be in their etiology once again. This may reinforce an early inclusion of these contractions in the rehabilitation.

Active eccentric contraction using the limb weight or with minimum manual resistance in the eccentric phase is an example of how this type of work can be induced early in the rehab stages.

By providing the injured muscle an early low load eccentric stimulus, properly adjusted to the functional and tolerance level of the muscle, it early beneficiates of the potential that this contractions have in enhancing collagen production and potentiate fibroblastic activity (LaStayo, P.C., Woolf, J.M., Lewek, M.D., Snyder-Mackler, L., Trude-Reich, Lindstedt, S.L., 2003), along with the advantages of inducing fiber tension in a proper alignment, stimulating the neuromuscular system earlier for that type of contraction. Video 1 shows a suggestion of exercises applied to rectus femoris, adductors and hamstrings in early stage of rehabilitation to provide an early low intensity eccentric stimulus.

Progress in the eccentric stimulus – When to overload eccentrically the injured muscle?

Eccentric overload training should not be performed before 10 to 14 days post injury, once normally this is the necessary period for the healing scar to have consistency, and application of high forces before that period may impair or re-injury the referred area. Prior to the introduction of eccentric overload training all resistive and lengthening tests of the injured muscle should be pain free and range normalized compared to the contralateral side.

Eccentric exercise at this stage will confer these junctions more resistance to loading, improve energy absorption potentially avoiding failure, and increase overall stiffness as it was shown previously for tendons, which will allow the muscle in rehabilitation to improve his load absorption tolerance and decrease future risk of recurrence (LaStayo, P.C., Woolf, J.M., Lewek, M.D., Snyder-Mackler, L., Trude-Reich, Lindstedt, S.L., 2003). At Football Medicine we choose to include closed kinetic exercises and open kinetic exercises, mainly based on extensive methods (6-10 repetitions) which imply less Maximum Resistance percentage (60-75%) and it will imply less tensile strength to the recently injured area and will allow a proper stimulus of strength. As the athlete progresses through the rehabilitation this Maximum Resistance percentage will be increase to allow a power stimulus using maximum loads (80-90%) with a repetition range between six to eight. It is important to highlight that testing the muscle for maximum eccentric strength is important to decide this progression. This can be performed using several methods (e.g. for hamstring at Football Medicine we adopt an isokinetic dynamometer in a seated position).

Combination of this type of exercises with power based work with 0-30% of their Maximum Resistance such as fast control movements will work on the neural activation control of the muscle and enhance power by improving the speed of muscle units recruitment. In the following video some simple exercises relative to quadriceps and adductor muscles in a progressive order are shown.

Work implicating hyperthrophy and maximum strength should be performed every three days, allowing recover between strength sessions which is fundamental to not increase injury risk from overloading, especially if outfield exercise is already taking place.

In this last case totally offloading the exercised muscle in the day after the strength session from both gym and outfield work is our recommendation at Football Medicine.

In the case of muscles such as the hamstrings, there is a reduction in the activation of the biceps femoris muscle as the knee approaches extension during eccentric contractions (Higashihara, A., Ono, T., Kubota, J., 2010). This may be one of the reasons why biceps femoris is the most injured muscle whilst sprinting, as it was reported that peak muscle-tendon force, length and strain for the hamstring happens during terminal swing in sprinting, with the demands over the biceps femoris increasing significantly above 80% of maximum speed (Schache,A.G., Dorn, T.W., Blanch, P.D., Brown, N.A.T., 2012; Silder, A., Thelen, D.G., Heiderscheit, B.C., 2010; Thelen, D.G., Chumanov,E.S., Hoerth, D.M., Best,T.M., 2005). Video 3 shows a few examples exercises relative to hamstring muscles rehabilitation.

In the case of hamstrings injuries, focusing both on strength and neuromuscular control using eccentric exercises will contribute to improve the muscle eccentric strength in the final range of motion degrees towards extension. The incorporation of new serial sarcomeres will shift the eccentric peak torque angle to longer lengths, and simultaneous improve the muscle lengthening capacity under tension, conferring it the capability to resist to the demands of the terminal phase of swing during sprinting actions (Brockett,C.L., Morgan, D.L., Proske, U., 2001; Brughelli, M., Mendiguchia, J., Nosaka, K., Idoate F., Los Arcos A., Cronin, J., 2010)

Although muscle injury rehabilitation should be as functional as possible, pain or awareness in the injured region should be the main markers for limiting the muscle recruitment in intensity, volume and type of gesture, even during late stages of the rehabilitation.

Details matter, it´s worth waiting to get it right.